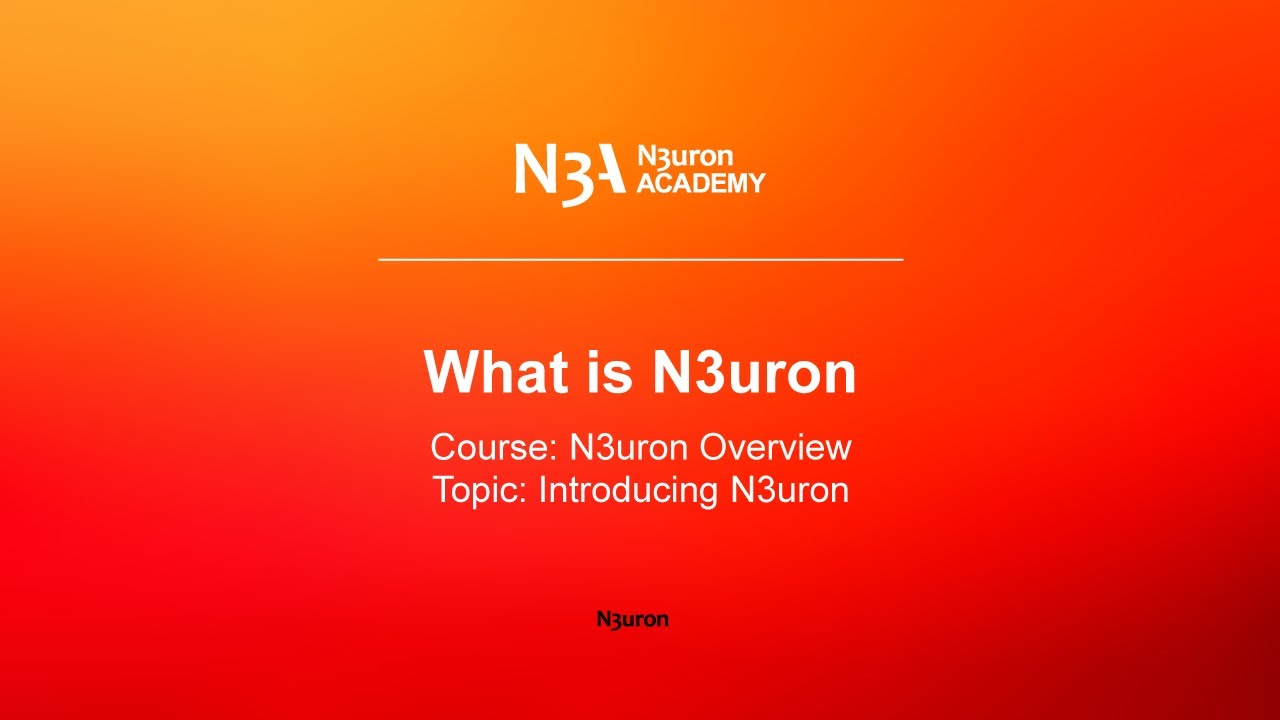 In this video of our N3uron Academy, we will share what N3uron is and walk you through the main functionalities of our industrial gateway platform and more to help you get started!

[00:00] In this video, we will review the N3uron software and its capabilities. We will cover some of the main features that make N3uron stand out as one of the most versatile Industrial IoT platforms in the world in terms of Data Acquisition, Delivery, Edge Computing, and Visualization. N3uron is a highly customisable Industrial IoT and SCADA software solution that bridges the gap between industrial plants, SCADA systems, and cloud-based services. N3uron software is web-based and is installed and deployed using web technologies. Thanks to its Web UI module, you can easily configure, control, and operate N3uron’s platform through its fast web interface. Lastly, N3uron software modules and the designer tool are launched using the Web UI interface, which can be run on any web browser or device.

[01:02] That said, what can N3uron do exactly? Using web-based communication technologies, N3uron’s software modules provide access to a wide variety of industrial devices, cloud-based services, databases, SCADA, MES, and ERP systems. This capability, along with its visualization tools, allows users to create powerful IIoT application solutions that can be used to monitor, control, and historize information regarding their industrial processes. N3uron’s Historian software module allows for high-performance data logging and data visualization. With just a few clicks, N3uron makes it possible to begin logging data to a MongoDB database or select an extensive list of SQL databases using its SQL Client module. The Historian Module also includes a data compression mechanism to reduce storage hardware and data transmission time. N3uron’s reporting system enables users to generate powerful PDF reports. N3uron reports also present Historical data, either from MongoDB or SQL databases, in the form of charts, tables, and more, as well as by means of printing, emailing, or saving daily, weekly, and monthly reports.

[02:13] N3uron can connect with an extensive list of SQL databases via its SQL Client Module, coupled with its visualization tools, which allows users to easily build database applications. N3uron enables you to configure alarms directly within the WebUI’s interface. Depending on the configuration established by the user, alarms will be triggered each time the specified conditions are matched. N3uron’s alarm system allows you to send out notifications via SMS and email. N3uron’s modular structure allows you to easily create highly scalable architectures to suit your specific requirements, combining all of N3uron’s functionalities, as needed, in order to give maximum flexibility to your N3uron node. What makes N3uron stand out as an Industrial IoT software platform?

[03:03] N3uron licenses apply at node level. Nodes can be remote or local, depending on whether or not they exchange data with another node. Each N3uron license gives you the ability to add an unlimited number of clients, screens, tags, connections, and devices. With a footprint of around 40 Megabytes, N3uron installation takes less than one minute to complete, making it fast and easy to deploy. N3uron is a multi-platform software that can run on Windows and Linux, supporting numerous previous versions of these Operating Systems. As a web-based software solution, you can access and configure N3uron from any device. N3uron’s core functionalities lie in its fully integrated software Modules, which allow it to function as a communication hub. Its OPC UA, DA, and XML Client modules allow you to communicate with virtually any OPC server, making it possible to communicate with almost any PLC available on the market.

[04:01] Additionally, N3uron’s OPC UA Server module enables data exchanges with any other third-party OPC UA client. N3uron also includes the MQTT Client Module, allowing users to connect the platform to any MQTT Brokers for fast and efficient data access. Using the Rest API Client module, you can connect N3uron to any web service. Additionally, you can access several SQL databases available on the market via its SQL Client module, such as MySQL, SQL Server, Postgre, and MariaDB. It also provides a RestApi Server for exchanging data with third-party applications and interacting with other industrial devices, such as barcode scanners, scales, etc. Finally, N3uron’s Web UI interface can be launched and configured from any device, regardless of the operating system. N3uron’s software modules are split into three large groups: Data Acquisition Modules, among which we can find all modules aimed at collecting data from industrial devices and applications, such as Siemens, Modbus Client, IEC 102, OPC UA Client, or REst API Client.

[05:10] Data Delivery Modules: In charge of exchanging data previously collected through Data Acquisition Modules with other devices and third-party applications, e.g. SCADA, MES, and ERP systems, cloud-based services, etc. Some of the modules included in this group are the Rest API Server, MQTT Client, OPC UA server, or DNP3 server, amongst several others. Last but not least, Edge Computing and Visualization Modules allow for the calculation of statistical values, use of expressions, scripts to be written and run at the network edge or seamless building and deployment of HMI and SCADA applications. All configurations are applied at node level, whether for connecting to an OPC server, an external database, a third-party cloud application, or an industrial device on the plant floor. The node is where all N3uron’s settings take place, via the Web UI interface.

[06:03] As previously mentioned, N3uron runs as server software and it is web-based. This particular aspect of N3uron allows users to access their N3uron node anywhere from within their network by using a web browser. The first step after N3uron installation is to get access to the node’s WebUI interface using any web browser. WebUI is a pure HTML5 web application with easy remote access. Once you are in the WebUI interface, you can start configuring and monitoring any data collection from your very own N3uron project. Once you’ve configured your node, you simply save the changes to your WebUI interface, and N3uron will start operating. You can configure device and database connections, Historian, SCADA, HMI, alarms, reports, and more. Once the primary configuration is complete and saved in the WebUI interface, you are ready to add N3uron’s Module software applications according to your project’s needs.

[07:03] You can add and configure your Module software applications with just a few clicks from the Model panel within the WebUI interface. From the WebUI, you can set as many vision clients and sessions as required. As N3uron is server-based, any changes to the project occur in the node and will update all of your running modules instantaneously. N3uron allows users to connect projects to virtually any SCADA, HMI, MES, and ERP applications using N3uron’s WebVision software module together with any database applications and more. The large variety of software modules available makes N3uron extremely versatile and adaptable to almost any application. Its ability to communicate with a broad range of industrial devices, databases, cloud services, and industrial protocols such as MQTT, OPC, and many others, makes data access practically limitless for N3uron. Future courses in the N3uron academy will dive deeper into N3uron, its uses, and functionality.

This website uses cookies to improve your experience while you navigate through the website. Out of these cookies, the cookies that are categorized as necessary are stored on your browser as they are essential for the working of basic functionalities of the website. We also use third-party cookies that help us analyze and understand how you use this website. These cookies will be stored in your browser only with your consent. You also have the option to opt-out of these cookies. But opting out of some of these cookies may have an effect on your browsing experience.
Necessary Always Enabled
Necessary cookies are absolutely essential for the website to function properly. This category only includes cookies that ensures basic functionalities and security features of the website. These cookies do not store any personal information.
Non-necessary
Any cookies that may not be particularly necessary for the website to function and is used specifically to collect user personal data via analytics, ads, other embedded contents are termed as non-necessary cookies. It is mandatory to procure user consent prior to running these cookies on your website.
SAVE & ACCEPT